written by Rossel October 18, 2010
“Wish Ko Lang” is an award-winning TV program. It is known for fulfilling wishes of people most especially of those who are in need. But I do not watch Wish Ko Lang. Why? Because it always makes me cry and I hate crying. It gives me runny nose and headache. I do not know what urged me to watch their episode about Ms. Geraldine Javier Oliva. And as expected I cried while sniffing to death. Damn runny nose.
Geraldine, known by her friends as Dane, is a former beauty queen. Given with beauty and wits, she was always the first choice in beauty pageants in her town. She is suffering from chronic kidney disease and while she is undergoing dialysis, she acquired metabolic problems in her bones that changed her physical appearance enormously. Despite of her conditions, she still works as a banker in Banco de Oro Balayan Batangas to support her family. What heart-warming is, her loving husband continues to love her and take care of her and their children. Her family is what giving Ms. Dane strength and will to live. 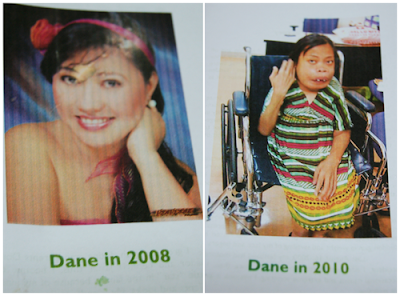 Now I know why there was a sudden urge to watch this episode. I must admit that I am not as brave as Ms. Dane. God wants me to learn from her story. I was inspired by her courage, strong faith and positive outlooks in life. Below is her story.

My Childhood, My Lifestyle

During my adolescent years, I indulged in socio-civic organizations, essay
writing competitions, beauty pageants, fellowships and many gatherings.
My diet included fatty, salty foods and cold iced tea. Though, in my
younger years, I never drank alcohol nor did I smoke. But I was addicted to
“junk food.” I confess, I loved to eat corn chips (chips, in general), salty
flakes, et cetera… I loved to drink cold cola with almost every meal and I
had less water intake. I can clearly recall that I had repeated attacks of
tonsillitis with rising fevers, accompanied by chills and aches in my back
and limbs.


I remember when I was in high school, I had frequent fevers and the doctor
said that there was blood in my urine specimen. I believed it to be an
ordinary infection. I was not aware of the physical changes, though my
friends noticed sudden edema on my face, legs and feet; but, I mistook it
as simple weight gain.


I remember when I was 21, I was hospitalized due to acute pharyngitis. The
provincial doctor told me that it would endanger my life. There was an
intense soreness in my throat and I had difficulty swallowing and talking.
Ignorant on the proper management on the disease, I did not fully
comprehend the proper food pyramid that I should abide by and I continued
on with my habit of eating “garbage food.”


When I got married at the age of 24, the habit became worse. Our (my
family)’s died revolved on fatty, salty food that were rich in protein and
carbohydrates. When I got pregnant, the cravings for these foods increased.
I concentrated on canned, salty and processed foods so much that I seldom
ate fruits and vegetables.


It was in February 2000, four months before I gave birth to my fourth
child, when I had pre-eclampsia. I got hospitalized because of chest
heaviness, rise in my blood pressure and increase in the amount of tissue
fluid manifested by the sudden gain in my weight and the swelling of my
face and fingers.


Last August 16, 2000, my husband had a motorcycle accident. This resulted
into my having post-partum depression. Since then, I had occasional nausea
and extreme vomiting. I mistook those symptoms as migraines or other small
illnesses.


It was in the last week of July 2003, after a seminar I attended in Laguna,
that I began to experience severe abdominal pain. My family decided to
transport me to Makati Medical Center for proper management and evaluation.
I was seen by a nephrologist because my creatinine was above the usual norm
and I was diagnosed with Glomerulonephritis. I started on twice-a-week
hemodialysis on September 2003. I personally considered once a week
dialysis because of financial constraints.


In 2007, I felt sudden changes in my body. I had decreased appetite,
immense depression, I was losing weight mercurially and I was more
irritable than usual. I was obliged to resume my twice a week dialysis. A
year afterwards, I began to feel muscle weakness in my leg, in my arms and
in my body, especially after hemodialysis. It was in 2008 when a donor came
and offered my her kidney. But after the Stage 2 work-up, the possible
kidney donor vanished, together with my initial gift to her (which wasn’t
that large an amount). Since then, my world just stopped. I felt miserable,
hopeless and I became so desperate, that I missed the chance to perceive
the sudden change in my looks.


During the first quarter of 2009, I experienced occasional gum bleeding and
my dentist noticed my growing palate. I consulted a specialist, a head and
neck surgeon. After a CT scan, the findings were “Fibrous Dysplasia” and
suspicious “acromegaly.” I was referred to an endocrinologist. The doctor
told me that I would need surgery to remove the adenoma on the right of my
neck due to hyperparathyroidism. Several fears dawned on me. The fear from
the procedure. The fear of its cost. The fear of the complications.


The abnormal growth of my palate continued and it led to frequent
gum bleeding. I had difficulty in eating. I could not chew food. My body
decreased in weight. I had a hard time walking so I spent less time on my
routine activities. I was not aware that I spent more time in a wheelchair
than anywhere else. Because of the frequent gum bleeding, I decided to seek
the aid of a head and neck surgeon in Asian Hospital. After a string of
bloodworks and CT scans, the doctor referred me to an endocrinologist.
Again.


When my medical insurance exhausted, I felt so powerless, helpless and
hopeless. According to my father, my financial steward, we already spent
PHP7 Million (approximately $155000) for almost 7 years of medication and
confinement. I disclosed my financial dilemma to my endocrinologist. Little
did I know that God answered my prayers through her. Truly, God works. She
organized a conference for some medical professionals to raise funds for
further management of my disease.

You can join the 4213 for the “3km Run for Dane” on OCT 31, 2010..@5:ooam. Click HERE for details.
And for those who wish to help her financially, you can email savegeraldine@yahoo.com
or you can deposit your donations to her account at Banco de Oro.
Account Number: 5890-12991-1
Account Name: Geraldine J. Oliva

TicketAmerica for Your Ticketing Needs

3 Easy Side Gigs to Start