written by Rossel June 1, 2010
When I learned that we need to post movie that starts with letter “A”, Avatar and Armageddon are the first two movies that crossed my mind. I am not a science fiction fan but these two movies are different. They touched me in a way like no other sci-fi movies did. I’ve already posted an Avatar review so here is my review of Armageddon. 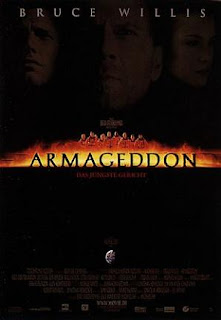 My Rating: 8/10
Armageddon is about a group of blue-collar deep-core drillers sent by NASA to stop an asteroid  on a collision course with Earth headed by Harry Stamper (Bruce Willis). I love Bruce Willis character here as the over protective father to Grace Stamper (Liv Tyler). Harry is so against Grace’s boyfriend A.J. Frost (Ben Affleck) because like him A.J. is an oil driller. But in the end, he sacrificed his own life for his daughter’s happiness,
Armageddon is noted for its large number of scientific inaccuracies but who the hell cares? The film was an international success. It is an action/adventure/ sci-fi movie and not based on a true story. I cried the first time I saw it and made me cry the second time. The story was very touching and inspiring. I love the story and will watch it and will cry over and over again.

Join us every week at…

I love My Legs and Skin

My Little Photographer and the Little Critters

How Can Our Politics Affect Housing Projects

My Husband in the Office

This is also one of myfave movie, the relationship between the daughter and the dad was remarkable, haist. Anyway pasensya na mommy if naun lang nakavisit, I dont have kasi internet connection for two days grrr

i LOVE this film! who doesn't? nice pick!

dami ngang inaccuracies mommy pero it's one great movie.. i loved watching this film too not for the sci-fi that it is but for the very basic human nature that it presents.

thanks for joining in the fun this week. next week, we will features movies with the theme Computer Geeks 101. till then, take care and happy tcp!