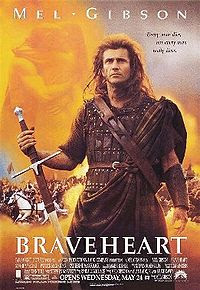 My Rating: 8.5/10
For me Braveheart is the best movie Mel Gibson has made. As expected, expert historians gave it nasty reviews because of historical errors but who cares? Movies are fictional that are made to entertain. All I can say is this movie has greatly impacted me. I love the soundtrack and the battle scenes. The actors did great and the ending was brilliant.  Everything is amazing and I recommend it wholeheartedly!
Braveheart is a 1995 American epic drama film directed by and starring Mel Gibson. Mel Gibson plays William Wallace, an intelligent, passionate and well-educated Scottish peasant who is determined to lead a peaceful life. He returns to Scotland after living away from his homeland for many years. He becomes the leader of a courageous army and leads the battle against the English forces and becomes the hero of his country.
The film won five Academy Awards at the 68th Academy Awards, including the Academy Award for Best Picture and Best Director. Mel Gibson has proven himself as a brilliant director and deserves all the credit he received for this film. I love him too in “The Patriot”. He is one of my favorite actors and I am saddened with what is happening to him now.

I like this movie too. Hhmm, I think i'll watch this again. Thanks Bes.

Braveheart was one of the most beautiful movies of 1995. Mel Gibson really was astounding in his acting in this movie. Thanks for the post. God bless you all always.