written by Rossel May 10, 2010
I salute GMA7 not only on their balanced and unbiased programming but also on their state-of-the-art technology.

I am seeing Angela Pearly Gates Montenegro, a fictional character in TV series Bones who specializes in forensic facial reconstruction, using 3D visual simulator for the facial reconstructions of the victims to identify them and asking my husband if the thing really exists in real life. Watching it with my own two eyes on GMA7 on a live telecast yesterday gave me goose bumps. The visual real time 3D simulator is being used by CNN and now it is being used by GMA7. It was launched yesterday when Mike Enriquez, an anchorman in GMA News, spoke with Howie Severino’s, a GMA reporter, real time 3D simulation, commonly known as hologram. The thing does exist! Yes, nothing is impossible these days. 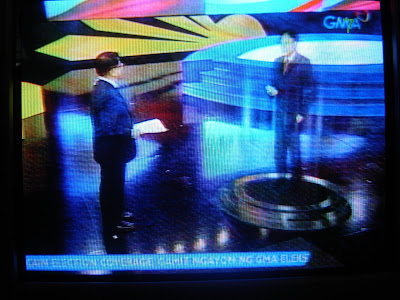 A picture of the conversation taken from our TV screen.
Thanks to GMA7 for enriching the lives of Filipinos everywhere with superior entertainment and responsible delivery of news and information. By doing such, you’ll always be the most respected and undisputed leader in the Philippine broadcast industry.
I Salute GMA7 was last modified: March 12th, 2015 by Rossel
Spread the love
Tweet

The Best Place to Eat Out

Perfect Wine for Our Food

Awesome work with this blog! My wife is also and stay at home working mom, I have so much respect for her and what she does all day with work and the kids, she is my hero!

I was wondering what you used to create your header for this blog?

hi sis, i'm inviting you to join my latest giveaway – http://www.melandriaromero.net/2010/05/be-beautiful-and-win-avon-anew-360.html thanks.

Hi, nice blog & good post. You have beautifully maintained it, you must try this website which really helps to increase your traffic. hope u have a wonderful day & awaiting for more new post. Keep Blogging!

I am always a Kapuso…