written by Rossel June 17, 2010
This is the wallet I am currently using. It is a Gucci replica, a gift from my sister-in-law last Christmas. I asked for a red medium sized wallet because according to Feng Shui  red wallet and accessories will bring me luck since I was born in the year of the fire pig. Red symbolizes fire and good luck.  But my SIL can’t see a red one so she gave me this. 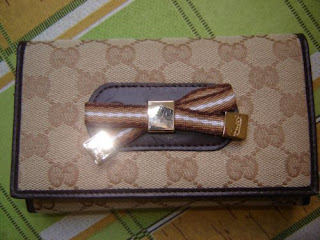 When I took its picture, the money inside is just P551.00. May be because I am not using a red wallet that is  why money is not staying long in it, ehehe. Other things inside my wallet are my two ATM cards, my Social Security System ID and family picture. I  don’t have any credit card because I am an impulsive shopper so a big NO for credit cards. 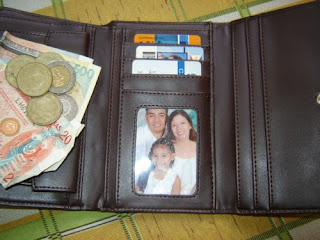 Have you ever thought how the use of wallet came about? Wallets, as a word, have been used by ancient people since the first century AD. It refers to a knapsack or a bag for carrying articles. In Ancient Greece, the wallet was used by a poor man to stock his provisions. As time went by and the Renaissance period came about, metals or coins were now being used as a mode of exchange. And from here, the wallet  has evolved from a pack of provisions to packs that could contain coins or sometimes, statements of accounts. (source)
What’s inside your wallet? Can you share it with us at…

Inside My Wallet was last modified: September 7th, 2018 by Rossel
Spread the love
Tweet

My Little Photographer and the Little Critters

Caravan Sites for a Perfect Get Away

My Artificial Plants and Flowers

The Zombies are Coming!

i say no to credit card too.. only debit.. by which I acquired to verify my paypal.
you have a very nice and neat wallet.

attractive yong wallet mo sis , simple ang design but elegant ang dating..me too i don't have credit card, only debit:)red wallet is sooo cute din, I have one before but I gave it to my sister…

uy, I love the trivia about the origins of the wallet! Nice work! I'm a history buff kasi, hehe.

Lovely wallet, Mommy Rossel. I like Gucci wallets kasi they're so creative with their designs!

Have a great weekend! 🙂

bdw, next Thursday will be my last stint as the host of Girls Talk, I shall see you with your post on what’s inside your bag.. can’t wait to see your fab bag actually.. =)

please stay tuned for the revelation on who will be the new host and the new home of GT starting july.. but I still will be joining GT so I shall not miss your post!

Thanks for joining and for all your support at GT. Happy weekend girl!

Yep, we're the same, I say no to credit cards 🙂

Very educational post about wallets. Nice to know the origin of wallet and how it evolved to its present form because of the invention of coin money. Thanks for the post. God bless you always.

ay naman… as always, may food for thought nanaman si are rossel… thanks sa info again…

re the organ donor card, i got mine several years ago and if i remember it right, they've mailed to me. kaso I think right now, u have to pick it up eh, check their FB page: