Legends of the Fall

written by Rossel September 6, 2010
Welcome to the September 6th edition of Tuesday Couch Potatoes, a Tuesday movie meme where we post about a movie each week. We will start this month with Brad Pitt’s movies.
Who would forget Brad Pitt as Tristan Ludlow in the Legends of the Fall? I think Legend of the fall is the first movie of Brad Pitt that I have seen that impacted me. I love Brad Pitt’s role as a rustic, vulnerable, strong yet thoughtful and loving man. I love him more when he went back home with his long hair. By portraying his role, he has proven that he is more than a face. After watching this movie, he became my favorite actor. 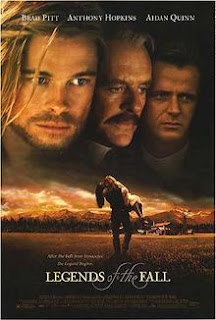 My Rating: 8/10
Legends of the Fall is a 1994 drama film based on the 1979 novella of the same title by Jim Harrison. It is an epic tale of three brothers (who are all in love with the same woman) and their father living in the remote wilderness of 1900s USA and how their lives are affected by nature, history, war, and love.
Legends of the fall was directed by Edward Zwick and portrayed by an excellent cast, Brad Pitt, Anthony Hopkins, Aidan Quinn, Henry Thomas and Julia Ormond.The movie plot is very good, the scenes are beautiful, the cinematography is excellent that made it won the Academy Award for Best Cinematography.
Legends of the fall is an epic film yet it is not boring which is common to epic films. This is one my all time favorites and watched it half a dozen times. If you are an epic lover who is romantic at heart, “Legends of the Fall” is the movie for you.
Join us and share your favorite movies every week at…

Legends of the Fall was last modified: March 12th, 2015 by Rossel
Spread the love
Tweet

To Our Dear RJ

Wrist Watch for Me

Yes, Brad Pitt is a consummate actor who is very good in acting and not only for his handsome face. He was great as Achilles in Troy. Thanks for the post. God bless you all always.

i have seen this film. it was really good, one of Brad Pitt's best. but it was kind of sad, lol!

Definitely one of his most notable performances that I've heard of but sad to say I haven't seen it til now! I will have to try to catch this sometime 🙂

I am intrigued with the way you retold the movie. might as well, grab a copy of this. =)

Hi there! Thanks for visiting my post on TCP… I never seen this movie but definitely, i'll be watching this someday! I have followed you…can you add me please? Thanks again!