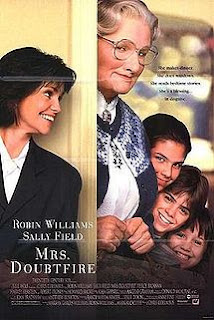 My Rating: 7/10
I admire Robin Williams’ versatility. For me Goodwill Hunting is Robin Williams’ best movie but I want him more as a comedian so “Mrs. Doubtfire“ is my choice for this week’s TCP.
After Daniel Hillard’s (Robin Williams) bitter divorce with his wife Miranda (Sally Field), he disguises himself as an old Scottish nanny (Mrs. Euphegenia Doubtfire) to spend time with his children secretly. Daniel’s children are held in custody by his ex-wife Miranda because he has no job and decent home for his children. As Mrs. Doubtfire, Daniel  is able to see his children everyday while he is learning to be a better person than he was before. Why Mrs. Doubtfire? Upon seeing a newspaper article with the heading “Police Doubt Fire Was Accidental”, he comes up with “Doubtfire” in a snap.
Mrs. Doutbfire has everything you could ever want in a comedy film. It is very funny and made even funnier by Robin Williams’ cross-dressing. It is one of Robin William’s best acted films and is great for the whole family.

one of our family's favorite films. this is also my entry, lol!

I love this movie, I can watch it over and over without getting tired of it..

I like this movie! I remember I watched it in the theater when I was still in college. 🙂

So many funny scenes, but the message was clearly there – and I admired his character to actually change into a woman just so he could be near his kids.

I laugh out loud with this movie girl hehehe

i loved this film too!