Home My Husband is an Addict

My Husband is an Addict

I have a confession to make. My husband is an addict – a basketball addict. At first, I tried to deny it but all the signs are there: he does not want to be disturbed while watching basketball games on TV; he’s irritable every time his favorite PBA team loses; he forgets many things but never forgets the jersey numbers of his favorite players; he dribbles/shoots an imaginary ball; he has a perfect attendance on his weekend morning basketball games; he talks to individuals I don’t recognize outside our subdivision who turns out to be his basketball buddies; he goes home after a game limping/nursing a wound and trying to hide it from me because I might not let him play anymore; he goes first to the basketball section of sports shops at the mall before everything else.

Since I can no longer do anything about his basketball addiction, why not I support it instead? And incidentally, I saw his playing shoes last week and it’s another proof that he indeed is an Ilocano (the wise spender). Why? It already has holes in it and yet, he still uses it. That’s why when I saw this pair of basketball shoes, I immediately bought it as a present for Father’s Day. It has all the qualities Hubby is looking for: cheap, not out of style, will last 2 years, not China-made and is size 11 or 12. Yup, you read it right. He’s size 11/12 and weighs 200lbs in a 5’ 6” frame and I pity those people whom he stepped on their toes.

Hubby admits that’s he’s no longer the player he used to be. It doesn’t mean that he was good but what he meant was he lost the speed and agility he once had. He became so fat that his ankle and knees ache whenever he plays basketball but like a true addict, he still plays.

Well, here it is. 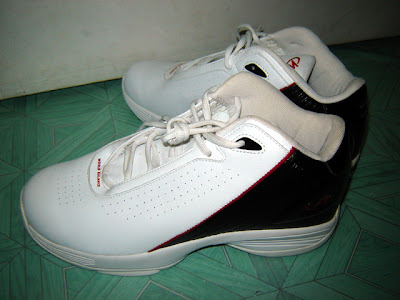 Hubby didn’t wait for Father’s Day and immediately used his brand new sneakers and you should have seen the look in his face when he saw his new shoes (he looked like a kid raring to show it to his friends, lol!). Advance Happy Father’s Day Papa. RJ and I love you very much.

My Husband is an Addict was last modified: May 24th, 2013 by Rossel
Spread the love
Tweet

Make Every Morning Simpler and Easier

Aaawww…that is so sweet! But you know what…come to think of it, all our husbands are children-at-heart ata talaga. My hubby is the same way with his game/trading cards, superhero comics, and online games. OH well!!! 😀

Nice to know that he loved your gift and appears so easy to please. Makes his addiction seem bearable. Hehehe 🙂

You’re lucky to have a husband who’s thrifty 🙂

Hope he cant read this post yet so it is a surprise gift for your hubby on Father’s day. 🙂 My husband is like that too. He never buys things on his own unless its all damaged. But when I see holes and tears, I quickly write those items down so I can window shop online. 🙂

Your husband must be so happy. Basketball shoes to boys are shoes and bags to girls!