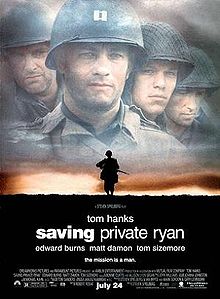 Maybe only few of you know that I am an action movie fanatic. Romance is just my second choice. I am romantic at heart but I do not know why I am enjoying more the action films. So for Steven Spielberg’s movie the top on my list is “Saving Private Ryan”.

Saving Private Ryan is a war film set during the invasion of Normandy in World War II. It is about the four Ryan brothers who are all soldiers and fought during the WWII. The three of four brothers in the Ryan family have all died within days of each other and that their mother will receive all three notices on the same day. The fourth brother Private First Class James Francis Ryan of Baker Company is still alive but is missing in action in Normandy. General George Marshall orders that Ryan be found and sent home immediately after reading the letter of US President Abraham Lincoln.

The scene where Mrs. Ryan receives the notice of the death of her three sons and Pres. Abraham Lincoln’s letter is very heartbreaking. I watched this movie thrice and cried thrice on the same scene. Would you believe that my husband watched this ten times or more and still watching it whenever he has the time?

Caravan Sites for a Perfect Get Away

A Great Place to Unwind

Thank You Lord for Your Blessings

Up, Up and Away

Why Do People Love and Enjoy Chocolate So Much

I have seen this movie and it was a great one..

This movie is heartbreaking i cried in this movie.