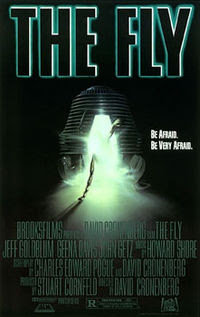 The Fly has two versions, the 1958 and the 1986. But I must say that the latter version which was directed by David Cronenberg, surpasses the original ’58 version. I remember watching this movie twice when I was in high school. When I heard its title I was expecting a horror film but this one is a drama with amounts of romance and suspense, which is really far from my expectations. The special effects were very good for the eighties film.

Jeff Goldblum’s performance is particularly good as the nerdy scientist Seth Brundle. He begins to transform into a giant man/fly hybrid after one of his experiments goes horribly wrong. The transformation is witnessed by Veronica Quaife (Geena Davis); a reporter documenting Seth’s story. As Seth is deteriorating, he is finding the cure. The question is, will there be enough time and will he be able to find one? Well, find it for yourself, ehehe.

This is the first film, about genetically engineered, that came into my mind. It is sometimes surprising to find a truly great movie when you least expect it. So hit the badge below for more unexpected great movies.

The Fly was last modified: March 12th, 2015 by Rossel
Spread the love
Tweet

Things Inside My Bag

I Want a Digital SLR

I seen this have you seen the Fly 2?

Yes, I saw both pictures and I would say both are good in their own individual ways. The latest version starring Jeff Goldblum has the added advantage of the very latest in cinematic technologies to enhance its special effects. Thanks for the post. God bless you all always.

nice review about this great movie the fly now i will like to watch this movie soon after read this share.
thanks .
Nice blog keep it up.