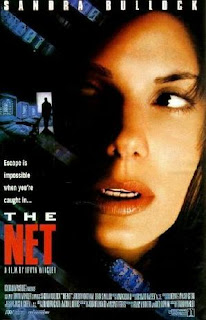 Angela Bennett (Sandra Bullock) is a young and beautiful computer expert. She works from home as a computer analyst of Cathedral Software. She has few friends and almost no one knows how she looked like. Even her own mother who is suffering from Alzheimer’s failed to identify her.

Angela had her identity stolen digitally and replaced with that of someone who has serious problems with the police and who thus took over Angela’s identity. She lost her home, her job…her life. She struggles to find out why this has happened and how to get her identity back.

This 1995 political thriller film has many mistakes and inaccuracies regarding computers. You don’t need to be a computer geek to identify those, but then again this is just a movie and not based on a true to life story. Besides I was entertained by this film so I will give it a 6/10 rating.

This weeks TCP theme is “Computer Geeks 101”. Share with us your favorite computer geek movies at…

The Net was last modified: March 12th, 2015 by Rossel
Spread the love
Tweet

Understanding the Basics of a Speaker

New Dining Room Set for Us

Afraid of the Wrinkles

Wow two couchers feature this one, i know its a good movie so can't blame yah.

you are so korek mommy.. dami ngang inaccuracies sa movie na to in terms of computers pero it was rather fun if only for the rush and the thrill that one gets from the chase scenes.

thanks for joining us this week on TCP. hope to see you next week for your 3D experience movie. till then, take care and happy tcp!