First, I would like to thank those who texted, e-mailed and called me, showing their concerns. Thanks also to those who prayed for me and my family. Me, Rhonnell and RJ are safe through God’s help. I was able to read your messages only this morning. We just got our electricity back the other day and our internet connection late last night. It was a miracle that our whole barangay submerged in flood except for 2 subdivisions, the place where we are living in and the adjacent subdivision to our place. The water at the gate of our subdivision was neck deep. The flood reached our laundry area but only ankle-deep. Our angels saved us!

However, my parents, all of my siblings, and other relatives were badly affected. First time in history that their place got flooded. The whole first floor of their house submerged in flood. Thank God that they have second floor so they all stayed there and were able to save some of their belongings. But my brother who is living just a block away didn’t make it to my parent’s house for the water was rising so fast. They stayed in their neighbor’s house for a day. Whoever you are, thank you very much for letting my brother and his family stayed in your house. May the Good Lord bless you and your family more!

Last September 26, typhoon Ondoy hit the Philippines and it was raining for 24 hours. It was the highest recorded rainfall in Philippine history. There were many casualties and thousands of houses submerged in flood. Hundreds of families were stranded on their roof, the only place free from water. In Cainta alone, where my parents are living, 95% was flooded, 12-15 ft. deep. I was crying and praying while listening to the radio for 2 days and 2 nights. I can’t sleep and I could hardly eat. I was worried about my family. As much as I want to go to my parents’ place the following day, it was not safe for the flood was still neck deep. The rescue team can’t penetrate the place because of the stranded vehicles on the road and because of the rapid water current.

The other day, we’re able to go there. I was crying on our way to my parents house as there is no place that  is not affected by typhoon Ondoy. 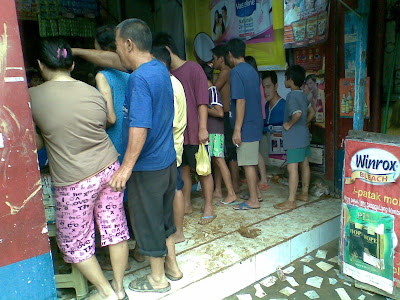 We passed by grocery store to buy goods and other supplies for my family and relatives. The queue was terrible. There were panic buying in all groceries and stores. 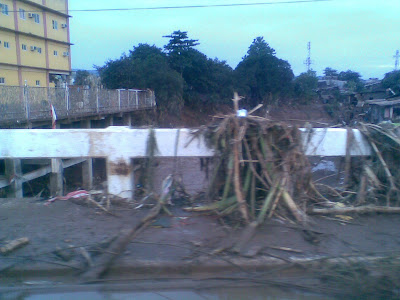 This is Nangka bridge…boundary of San Mateo and Marikina. There are debris everywhere until now. The river I think is 12 ft. below the bridge but it overflowed and reached until waist-deep. 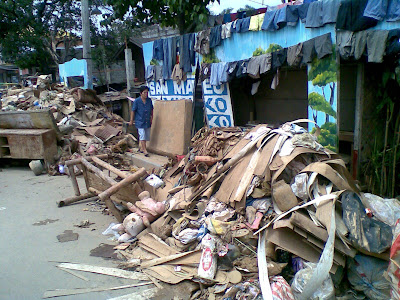 This is the national highway. There were tons of debris. Some of them were appliances and furniture. 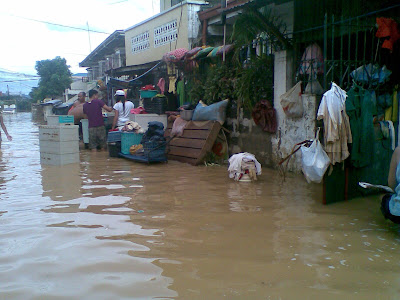 This is my parents’ place. It was still flooded when we went there the other day, knee-deep. 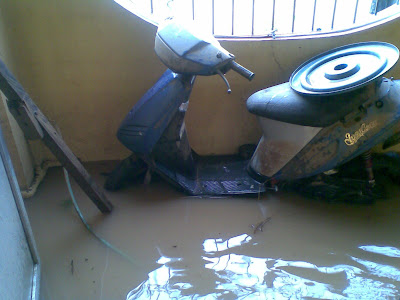 At my parents’ terrace…poor motorcycle. 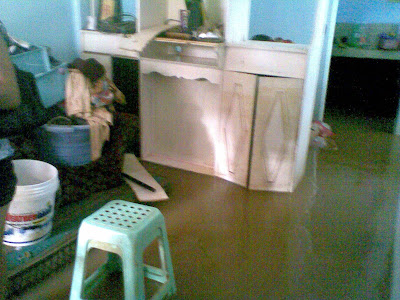 My brother’s house (after Ondoy)…he saved only his television set…the rest drowned in flood. His roof was the only part of the house that can be seen. 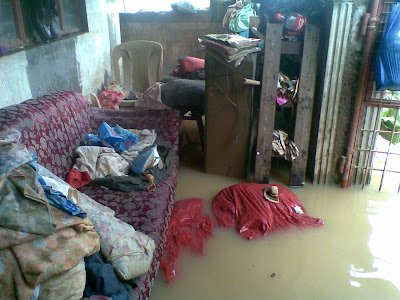 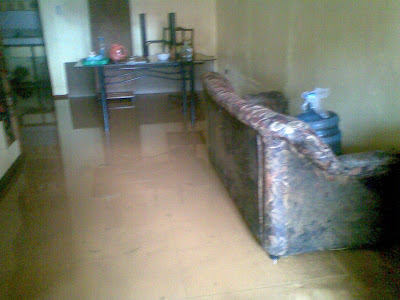 My parents’ house…the water reached the ceiling of their first floor. 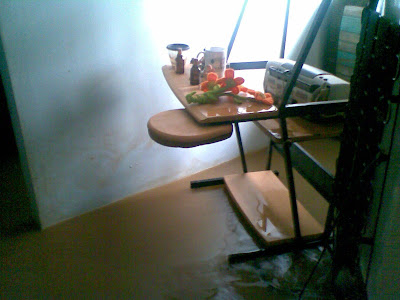 My other brother’s house. The water reached the ceiling of the first floor. 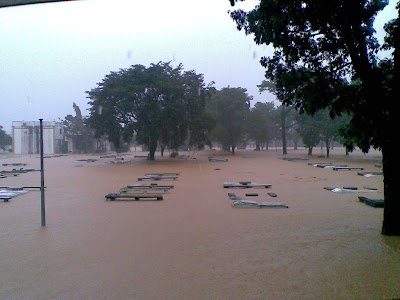 This is Paraiso Memorial Park…it’s located at the back of our subdivision. This is a first class memorial park with green grounds. People used to jog here every morning. The picture was taken when Ondoy started to fall. After few more hours, all the tombs were gone. 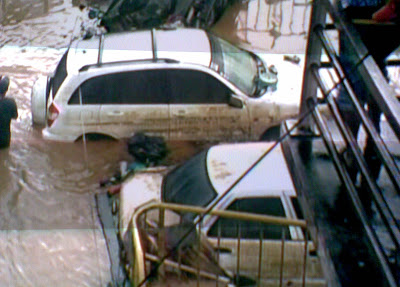 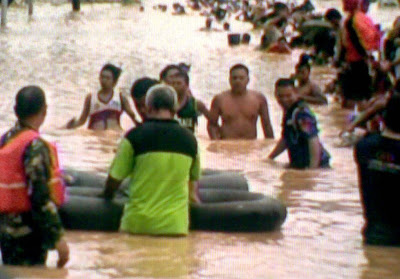 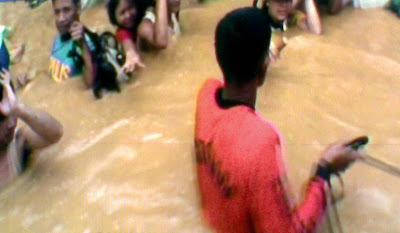 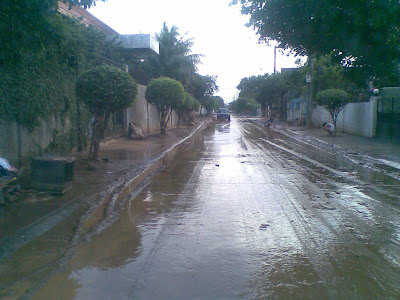 I can’t believe that a devastation like this could possibly happen. It is possible pala for the whole Luzon to be submerged in water. This tragedy is really hearth-braking. I can’t help myself from crying until now. My sympathy and condolences to those who lost their houses and loved ones.

It’s about time for us to really take care of Mother Nature. Stop abusing her. Let us not wait for another tragedy to happen.

My Hiatus is Over

Hi Rossel, I am thankful that by our Lord God's protection and mercy is upon us. I am glad that you are Rj, and Dash are okay. Be Safe! 🙂

Hello Rossell, Been thinking of you since we heard about the storm. I'm so sorry to hear that your family got hit personally. It was amazing of you to put up your report for all of us to see. All my best to you and hope you and your family continue to stay safe and are able to deal with putting your lives back together. I'm very glad you are your family are doing okay, though. Take care.

Alam kong mahirap magsimula uli, pero ang mahalaga, walang nasaktan sa kanila. I am sorry for whatever happened to your families' houses. glad they are safe and hopefully, no more tragedy like that.

Oh Rossel, thanks God you are all safe! There is another storm coming, the news said that it's a Super Typhoon. Sana naman lumihis sya!

God Bless you and your family!

Oh my God, that is really bad. But I am glad that all of you are safe!

Hi Rossel, It's great to know that you and your family are safe.In a more positive note, It's better to have lost material belongings than a family member.

I am so sorry about this Tokaya but as peachkins says, its great that you and your family are safe. Material belonging can be replaced.

I am really sorry to hear this Ross. I am glad that you and your family are safe. I feel sad to those who lost their loved ones. Material things can be replaced but not the life of the people we love.

im sorry about the damages but im happy to know you and your family and loved ones are fine… take care Rossel and God bless!

Hello Rossel, regret to read of the horrid storm and floods.
Sorry about your parents and relatives homes, but glad to know everyone is safe.
I guess everyone was caught by surprise and speed of the typhoon. Saw it on TV.
You stay safe and take care…best wishes, Lee.