written by Rossel October 5, 2010
October is the start of TV series in the US so since last week my husband started downloading our favorite series like Chuck, NCIS, NCIS LA, and Bones. We are excitedly waiting for each episode every week. October also is the time when most movies are released and I am looking forward to good movies most especially Stone, to be released on October 8. 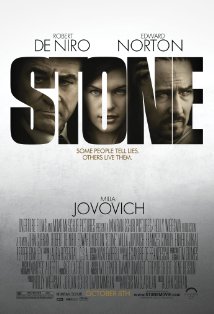 Stone is about  a convicted arsonist looks to manipulate a parole officer into a plan to secure his parole by placing his beautiful wife in the lawman’s path. With Edward Norton as Gerald “Stone” Creeson, the convicted arsonist and Robert De Niro as Jack Mabry, a rigid parole officer. Based on reviews through advance screening, it was rated 8.2/10 so I assume it is a good film.

Protect Your Family from Sex Offenders

Know Me Through WBFC #9

A View from the Cemetery

Wow, sounds like an exciting movie! A rating of 8.2 is high so it must really be good! 🙂

hi, must be an interesting movie to watch.
am not into that kind of a movie, but might try it. cheers!

wow! with such really BIG NAMES, i quite assume it really is good..

Do you really thing Stone is going to be in the same league as NCIS and Chuck ? ? That is setting the bar nice and thigh !