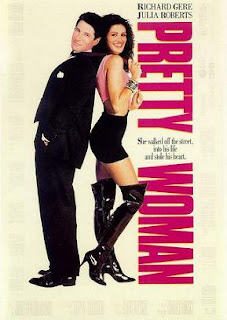 My Rating: 8/10
Who wouldn’t love Julia Roberts? She is one of the best and the most beautiful actresses in Hollywood. She has been named one of People magazine’s “50 Most Beautiful People in the World” eleven times, tied with Halle Berry. She has starred in over 43 movies and my favorite of them all is “Pretty Woman”. This movie is known to be her biggest break.

Pretty woman is one of the wonderful romantic comedy films in 1990, co-starred with Richard Gere and directed by Garry Marshall. It grossed $463 million worldwide.

A very successful, wealthy lawyer, Edward Lewis (Richard Gere) hires a beautiful and unlikely prostitute, Vivian Ward (Julia Roberts), from Sunset Blvd to bring along to various business events. An attraction developes between the two and Edward finds it harder and harder to let the infectious, kind-hearted Vivian go. How a prostitute transforms into a princess is phenomenal. A modern Cinderella story.

Richard Gere and Julia Roberts? Perfect! They are in fact one of the most attractive pairs in cinema. They look very good together. Gere and Roberts both portrayed their characters very well. I laughed, nearly cried and touched by Pretty Woman. I will never get tired of watching this box-office hit over and over again.

Are you Julia Roberts fan? Click the badge below for her other movies.